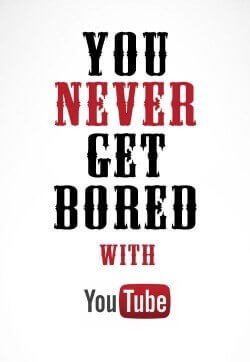 “The play button is the most compelling call to action on the web.”–Michael Litt

That Michael Litt guy is a genius.

Mr. Litt is the CEO of Vidyard (a software company, headquartered in Canada that creates software to host and analyze video performance). And he’s right. Nothing is more inviting online than a play button.

Did you notice not too many people watch much TV anymore?

Here’s an excerpt from an article written very recently (Sept 2) by Mr. Litt himself.

“Five years ago, if someone had asked marketers about their use of social media technology, only about 20 percent would have said they were invested there, too. Look how far social has come. Just about every company now has a person, if not a team, dedicated to social. We’re already starting to see the same thing with video, and adoption is hitting an exponential curve.

Video is poised for huge growth in both B2B and B2C marketing. That’s what I see in all the other data and anecdotal evidence about video. My own company has seen 1,000-percent growth in customers using video platform technology in the last two years. Last year, a joint report from the Content Marketing Institute and MarketingProfs found that video ranked higher than white papers, infographics and research reports for content marketing, and was up 6 points over 2013.

And that doesn’t even take into account the big picture statistics on online video. Internet prognosticator extraordinaire Mary Meeker predicts that, by 2017, 74 percent of all internet traffic will be video. Facebook, Twitter and LinkedIn have all made bets on video recently.”

It seems Mr. Litt is confident that online video use will continue to surge.

Comparing statistics between the number of people watching TV and watching online videos, it is apparent that more people, in all possible demographics, have started to watch videos more online than on TV. 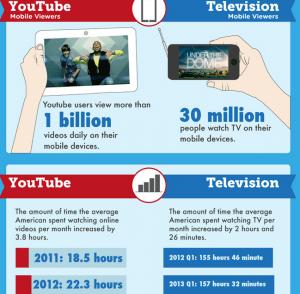 In this infographic (released in 2013), we can see that the popular online video platform YouTube had viewership increased by 3.8 hours per American. Even in mobile video, it seems that YouTube has won people over cable television. These statistics are of course understandable given that internet availability and accessibility surged as well in the last five years.

How Severe Is Our Screen Addiction?

Here’s a question for you: how much time do you think we really spend with our eyes transfixed on a digital display?

Go ahead and think, we’ll wait.

According to the infographic below from PGi, most people spend five hours on their computer or laptop each day, which is a noticeable upswing since 2010 when the average was three hours.

The typical person also spends four hours watching television and just over two hours on their smartphone or tablet. Nearly 50% of the time spent on these electronic devices is dedicated to entertainment, such as streaming TV shows and movies or listening to music. 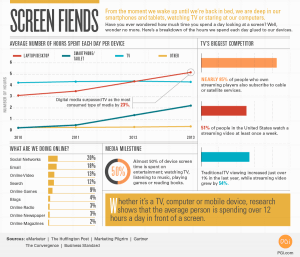 Another interesting note in the stats above is that almost 85% of people who subscribe to cable and satellite services also like watching online videos. This means that these people like to have an option to watch the shows that they want, whether they are at home or when they are mobile.

“Online video consumption continues to be concentrated among the youngest online adults, and those with higher education and income levels, but over time it has grown substantially among virtually all groups of online adults,” report author Kristen Purcell said in a statement.

As of 2009, comedy and educational videos are among the most widely viewed video genres, with more than half of online adults saying they watch those categories.

Music videos showed the largest growth in viewership between 2009 and 2013, from 32 percent to 50 percent.

Among those who post or share videos online, 35 percent said hoped or believed this would go “viral.” Just five percent of those who have posted said they had regrets about at least one of the posted items.

It is perhaps predictable that teens watch more videos online than adults. Having more free time on their hands, teenagers can easily get their phones and watch their favorite YouTube music video or movie online.

Hulu and Netflix users are streaming content across an array of devices, with the PC still being the most popular. But it’s otherwise sobering to see the array of devices being used to watch video content.

Nielsen also reports that “84 percent of smartphone and tablet owners say they use their devices as second-screens while watching TV at the same time.” These ‘power’ users can do a wide range of things while watching TV — all of which begs the question of the continued impact and effectiveness of TV advertising. 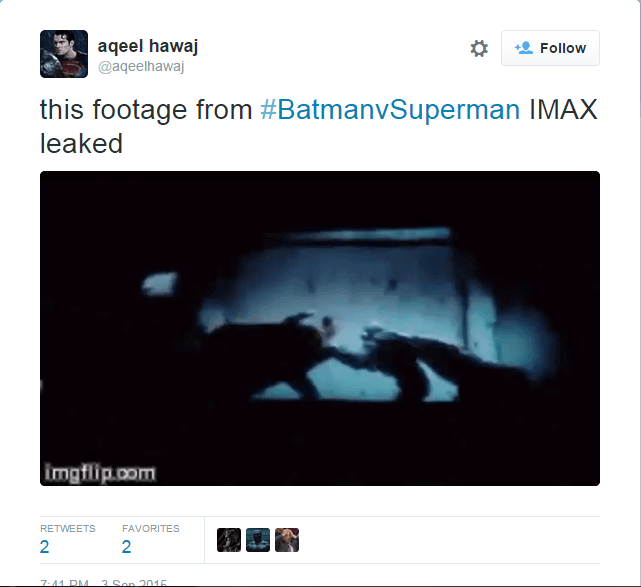 2015: Which Social Media is the Best Platform for Posting Videos?

And Facebook knows: they’ve added features in the last few months that point out they are increasing the amount of attention they give video: view count, embedding options, video for website conversions. This means there is more to come. 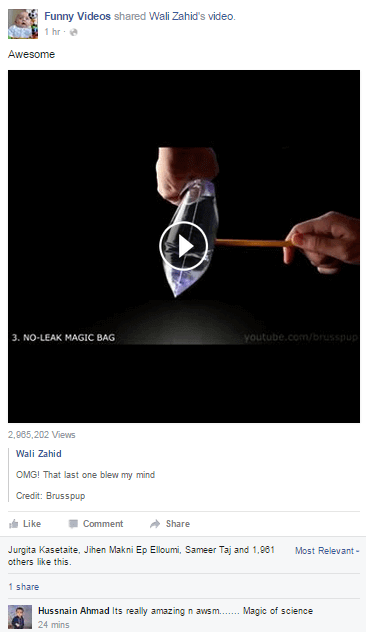 I’ll go into a couple of the biggest ones.

Video on Twitter is for Engagement: Direct, Social, & Real

Twitter’s new video product that was released late January has changed the way I use and consume the platform. Video on Twitter truly is social and the best way to use Twitter video is by connecting and engaging, rather than just pushing. As Twitter has grown in size, it’s become a listening platform. Five years ago, I could send a tweet and get more engagement on it than I do now. I had less of an audience, but the audience was paying closer attention. It was more serious. Now the amount of information and users on that platform has gotten so intense that it’s hard to have that same engagement. It’s hard to get anyone’s attention.

That’s why in this game, the real way to win with Twitter video is through engagement – using it as a “pull” rather than a “push.”

The truth is, people respond to effort. When a celebrity favorites your tweet, you get excited. Someone you admire likes a photo of yours on Instagram, it makes you feel good. Because, in reality, it’s not about the 100th of a second it takes to double tap that photo — it’s about the fact that they looked at your profile. They chose a photo. They saw it. And they “liked” it. That interaction, which takes all of 5 or 6 seconds, really touches people in a way that is unique to the powers that be on social.

With Twitter’s new video feature, they’ve been able to take that feeling to the next level.

All you have to do is log in and engage. Reply to a tweet using the camera option, select video, and start talking. It takes me nine to twelve seconds to make a video and reply, but those extra seconds hold a lot of meaning. Not to mention it’s more personal, visual, and we are living in a world where the visual is often regarded as a better engagement than the written.

There’s also more room to set the tone. A lot of things can get lost in a tweet. I might say “thnx” but that person isn’t 100% sure what my tone really was. But with Twitter video, the message comes across loud and clear.

It’s fifteen seconds of your attention on one person instead of two seconds. Do you know how much that means? Time is so incredibly precious to people. We are in control of it and we hate when it’s wasted. But you know what we value more? When someone else decides to lend their most precious asset to us.

That is what excites me most about Twitter video. Giving time to people. More time. Personalized time. And that is awesome.

Snapchat Video is the Hottie at the Gym: It’s All About Attention

More than 60% of U.S.13 to 34 year-old smartphone users are Snapchatters.  They now have more than two billion video views a day.  And there are a few interesting things about Snapchat as a platform when it comes to how it works.

Snapchat gets your undivided attention because, in order to view a video, you have to have your finger on the screen. (edit: since this article, Snapchat has changed this feature. Read more about it here.)

It’s also one of the only platforms in which you can draw creative on top of the video, making for some awesome Snapchat exclusive artists like Shonduras.

Most importantly, videos have a maximum life of twenty four hours, or less if the users chooses to make it so. A video can last down to a second. The urgency to see something before it disappears can be a huge factor. I had a very successful start on the platform by Snapchatting users telling them to screenshot the snap before it disappeared and post it to Twitter to get a reply from me. People respond to that urgency.

And now, marketers are getting really serious about Snapchat as a platform to reach an enormous number of people due to some key changes Snapchat has released. Earlier this year, Snapchat launched the Discover section of the app. It’s a feature that allows users to receive content provided by media companies. Current participants include National Geographic, Vice, ESPN, and more. Eleven participants in all. It’s a very serious play on the company’s part because it puts it in a very aggressive place with the overall user interface of the app. It completely changes how the app is both perceived and used.

Instagram is very popular among teens but in reality, it’s more of a photo platform than video.  However, according to this very recent news (Sept 3), it is apparent that Snapchat is going to be the winner.

In just three months, Snapchat has doubled the number of video views it gets per day to 4 billion, a spokeswoman for the social media app said.  That puts Snapchat on equal footing with social media giant Facebook, which announced it hit 4 billion daily views in the first quarter of this year.