“Marketing is too important to be left to the marketing department.” – David Packard

There is a hit TV series on AMC called Mad Men that focuses in the advertising world. The title is a term coined by a group of men in advertising/marketing several decades in New York City who did not want to call themselves ‘Ad Men’ for fear it would be misconstrued or misheard.  Thousands called the term genius.

Decades ago, people began to realize the value of marketing, and in the past 20 years, various industries have changed the way they market to current and potential clients.  Continue reading to see how the marketing industry has dramatically changed.

If you are not yet on the level of ‘marketing expert’, here is a YouTube video by Steven Van Hook, Ph.D., that can help you understand the basic terms and concepts in the power of marketing.

People are actually more familiar with the term advertising, which they think is interchangeable with marketing. But, there is a difference.

Marketing vs. Advertising: What’s the Difference?

You will often find that many people confuse marketing with advertising or vice versa. While both components are important, they are very different. Knowing the difference and doing your market research can put your company on the path to substantial growth.

Let’s start off by reviewing the formal definitions of each and then we’ll go into the explanation of how marketing and advertising differ from one another:

Advertising: The paid, public, non-personal announcement of a persuasive message by an identified sponsor; the non-personal presentation or promotion by a firm of its products to its existing and potential customers.

Marketing: The systematic planning, implementation and control of a mix of business activities intended to bring together buyers and sellers for the mutually advantageous exchange or transfer of products.

For the complete article: http://marketing.about.com/cs/advertising/a/marketvsad.htm 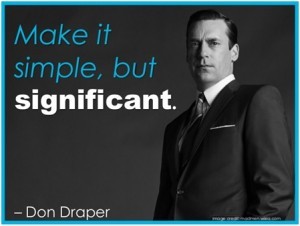 So basically, marketing is like a general-main topic while advertising is the specific subtopic.

The Impact of Marketing

Howard Schultz, the Chief Executive Officer and chairman of worldwide-popular Starbucks said that “Starbucks is not an advertiser; people think we are a great marketing company, but in fact we spend very little money on marketing and more money on training our people than advertising.”  If you think about it, spending more to train your employees is effectively still promoting your company, and in turn a marketing strategy.

The Importance of Marketing for the Success of a Business

The heart of your business success lies in its marketing. Most aspects of your business depend on successful a successful marketing campaign. The overall marketing umbrella covers advertising, public relations, promotions and sales. Marketing is a process by which a product or service is introduced and promoted to potential customers. Without marketing, your business may offer the best products or services in your industry, but none of your potential customers would know about it. Without marketing, sales may crash and companies may have to close.

Once your product, service or company gets on the radar of your prospects, it increases your chances that consumers will make a purchase. As awareness becomes a reality, it is also the point where new customers start to spread the word, referring friends and family about this amazing new product they discovered. Your sales will steadily increase as the word spreads. Without employing marketing strategies, these sales may not have ever happened.  Without sales, a company cannot succeed.

Sales are the chief goal of businesses. This is a fact. Otherwise why go in business at all? And one of the keys to higher sales is marketing. People have been using this key for the past decades and in the past 20 years, it has changed industries, it has changed the world.

1995 – It’s only a retooled operating system, but Microsoft Corp. turned the introduction of Windows 95 into a global event. The company backed the product with a TV ad blitz (from Wieden & Kennedy) rocking with the Rolling Stones’ “Start Me Up.”

Microsoft staffers around the world hyped the product with publicity stunts — bathing the Empire State Building in Windows 95 colors, painting the logo on fields in the U.K., floating a four-story-high Windows 95 box in Sydney’s harbor.

The world was primed when Windows 95 appeared, with media covering the debut at 12:01 a.m. Aug. 24, 1995, in stores around the globe. “This is a historical moment,” Microsoft executive Brad Chase told Ad Age minutes before a store opened at midnight near Microsoft’s suburban Seattle headquarters. “I don’t want to be too melodramatic, because it is only software. But it is pretty amazing.”

All timeline excerpts will be from this site: http://adage.com/article/ad-age-graphics/ad-age-a-history-marketing/142967/#1990

Marketing Too Effective in the Tobacco Industry

1998 – The nation’s top four cigarette marketers and 46 of the 50 United States signed the Tobacco Master Settlement Agreement, settling lawsuits states had brought against the industry to recover tobacco-related health-care expenses.

The four companies — Philip Morris, R.J. Reynolds, Brown & Williamson, Lorillard — agreed to pay an estimated $206 billion and to put limits on marketing. (Reynolds and B&W have since merged into Reynolds American.) As part of the settlement, participating tobacco makers agreed to many ad curbs. 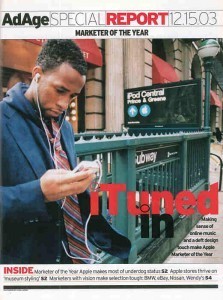 2003 – Apple was named marketer of the year by Ad Age based largely on the success of its iconic iPod. Apple introduced iPod just weeks after 9/11 while the nation was still slumped in its 2001 recession.

And it was Steve Jobs’ marketing genius that made it happen. Here is a transcript of Job’s marketing strategy:

“To me, marketing is about values. This is a very complicated world. It’s a very noisy world. And we’re not going to get a chance to get people to remember much about us. No company is! And so, we have to be really clear on what we want them to know about us.

The dairy industry tried for 20 years to convince you that milk was good for you. It’s a lie, but they tried anyway. Sales had been slumping for years.  Do you remember the “Got milk” campaign?  Sales rose after the campaign launched. “Got milk” wasn’t even talking about the product. In fact, it focuses on the absence of the product.

But the best example of all, and one of the greatest jobs of marketing that the universe has ever seen, is Nike. Remember, Nike sells a commodity. They sell shoes!!!

And yet, when you think of Nike you feel something different than a shoe company. In their ads, as you know, they don’t ever talk about the product. They don’t ever tell you about their air soles and why they are better than Reebok’s air soles.

So…when I got here, Apple just fired their agency and there was a competition with 23 agencies that…you know…four years from now we would pick one. And we blew that up and we hired ChiatDay, the ad agency that I was fortunate enough to work with years ago and created some award winning work including the commercial voted the best ad ever made, 1984 (by Advertising Professionals).”

For the video and for the complete transcript, go to YouTube: https://www.youtube.com/watch?v=kshIWIc15yg

2004 – Google (founded in 1998) held its initial public offering. They wanted to be the premier search engine ahead of Yahoo!, Bing, and a dozen others you’ve never heard of.  Today, if Google changes an algorithm in their code or offers updates on their products, the world takes note.  (Also in 2004: Harvard undergrad Mark Zuckerberg started Facebook as a place for his fellow students to connect.)

2004 is also the year that marks the start of a revolution for Marketing. 2004 has changed Marketing forever, for it is the year when social media (specifically Facebook) was born.

A Guide to the New Power of Facebook advertising

There have been some great posts on the Econsultancy blog discussing the changing state of Facebook and the reach of organic and promoted content, as well as the options available to advertisers.

Edwyn Raine recently wrote ‘the combination of a variety of advert formats and a highly affordable media network make it gold dust to reach new customers.’ Essentially it’s a good way to educate potential customers as to your offering.

Pricing is a particular bonus of Facebook advertising as Facebook’s model is to promote good content that customers are interested in. That means, the better your ads perform, the higher click-through rate, and the lower the CPC.

Add to this increasing costs in AdWords and Facebook is tempting lots of people in to play. First quarter results saw Facebook’s profits at $642m. As you can see from the chart below, ads are on Facebook. 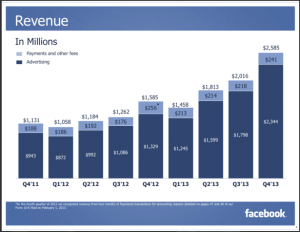 For the details, go to this page: https://econsultancy.com/blog/64924-a-guide-to-the-new-power-of-facebook-advertising/

Starting in 2004 onward, the presence of marketing keeps changing the internet industry each year. But it was around 2011 that marketers started to realize the power of social media. At that time, 1 in 2 Americans owned a smartphone. It was also around that year that internet usage of teenagers surpassed the time they spent in watching television. 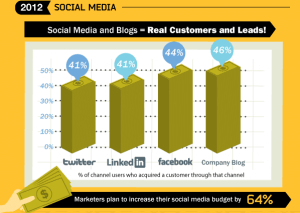 As you can see, marketing online has been very effective. To get 46% of your channel users to be your customer is not bad.  Social media has rapidly integrated itself into our everyday lives, both personal and professional, and it’s perhaps had no greater impact than on the world of marketing, with consumers and brands seeing enormous benefits and changes.

But how does social media compare to traditional marketing? What are the pros and cons of each?

The advantages of social media marketing are numerous…

-It’s cheaper. A lot cheaper. You can reach 1,000 people for a fraction of the cost using social media than you can through television, billboards or even email
-Social media is the only marketing platform that allows you to engage and interact with your consumers – it’s a two-way relationship, which can be hugely lucrative for brands

The results are measurable, and marketers can take immediate action to spot trends and re-align campaigns

It’s not all gravy, though. Social media campaigns can be time consuming and the impact can disseminate very quickly, whereas traditional marketing campaigns, certainly in television, can produce short term results that have greater tangibility.

For the complete article, see the source: http://www.adweek.com/socialtimes/social-vs-traditional-media-marketing/466873

We mentioned earlier that in 2011, the number of people who prefer the internet than watching television increased. 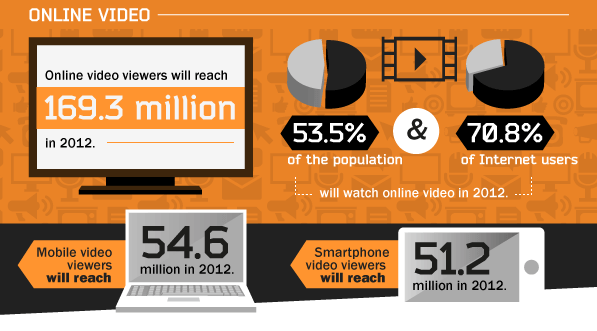 When Marketing Became Part of History

In October 2012, Felix Baumgartner took a leap back to Earth from 24 miles off the surface as part of a Red Bull promotion.

In one fell swoop, Baumgartner became the first person to break the sound barrier without any vehicular help — and Red Bull took over the internet, with a full eight million people watching live and blowing up the social networks.

The stunt marked a new era in advertising history: the commercial didn’t interrupt the event, it was the event. 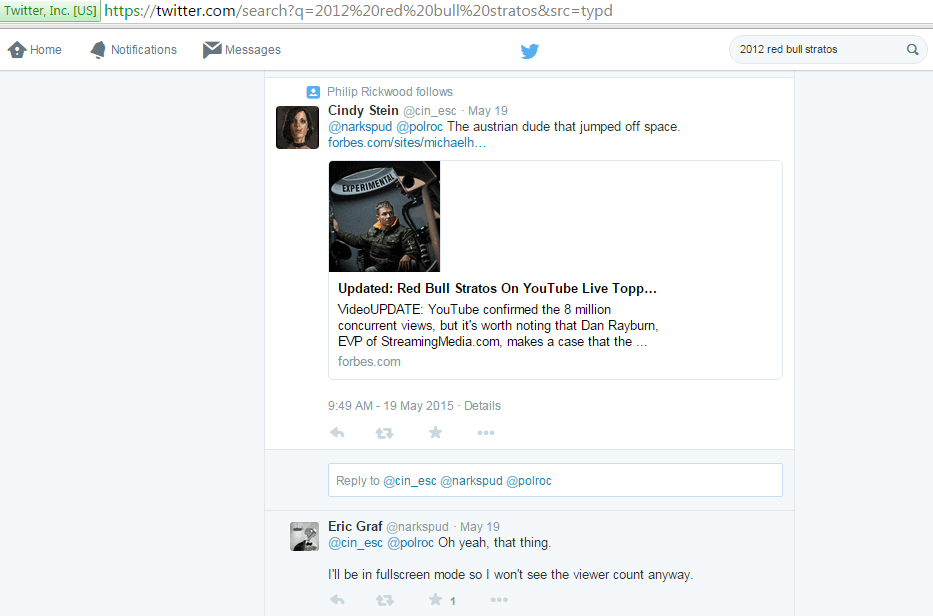 As Marketing continues to change industries,
marketing itself will continue to EVOLVE.